The Mountain Research Centre (CIMO) team will develop experimental work on two bio-regions (Directive 92/43/EEC): 1) Mediterranean bio-region, where two farms will be allocated to raising the Churra-Galega-Braganana (CGB) breed, located in Braganza, Northeast of Portugal, and 2) Atlantic bio-region, where two farms will be devoted to raising the Bordaleira de Entre-Douro-e-Minho (BEDM) breed, located in Ponte de Lima, in the Northwest region of Portugal. 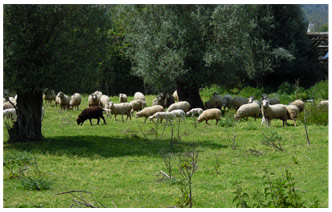 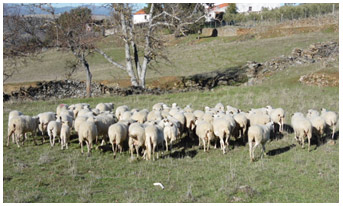 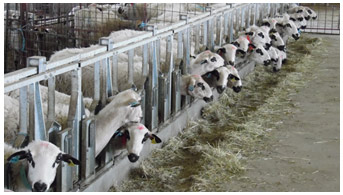 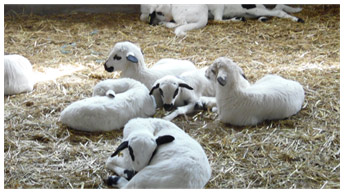 b) Farms in the Atlantic Bio-Region
The two farms are located in Ponte de Lima, at the Minho region (Northwestern Portugal), at an altitude of ~600 m.a.s.l, which is classified as Atlantic bio-region (Directive 92/43/EEC). The climate in Ponte de Lima is warm and temperate; the rainfall occurs more frequently in the winter than in the summer. The Kppen-Geiger climate classification is Csb, and the average annual temperature is 14.8 ºC with a precipitation average of 1228 mm. The driest month is July, with 16 mm of rainfall, and December is the month with the highest precipitation of 167 mm. July is the warmest month of the year, with 20.5 ºC of average temperature. January has the lowest average temperature of the year, being 9.6 ºC.

The Farm 2 is the experimental flock of the Agrarian School of Ponte de Lima. The flock is composed of 40 ewes raised in a semi-extensive production system. The reproduction system is natural reproduction, using the male effect to synchronise the mating system.

Churra-Galega-Bragançana (CGB) sheep breed belongs to the Churro type, which have phylogenetic relationships with the ancestral Ovis aries Studery (DGAV, 1991). These animals are characterized by their large stature, with large legs which give them a peculiar and characteristic aspect, reason why the local producers designate these animals as pernalteiros (long-legged ones). They present a very short fleece with an irregular surface, and are traditionally used to produce meat - their main function - wool and manure to fertilize the agricultural soils. Even today, they are raised under an extensive production system based on pastoral grazing, in which they are fed with spontaneous pastures that grow in uncultivated, crop residues (cereals stubbles), and improved semi-natural pastures, such as the typical pastures Lameiros.
Currently, the CGB breed is produced throughout the region of Terra Fria (Cold Land) Transmontana, mainly in the countryside of Braganza and Vinhais. The CGB population was circa. 100,000 animals in 1952 (DGAV, 1991); however, currently, there are 11053 females and 377 males registered in the CGB herd book (ACOB, 2018).
The CGB breed presents a great rusticity and stands out due to its ability to adapt to the topographic conditions of mountain areas.
The breed’s main ability is the meat production, and the productive characteristics of these animals are: birth weight 3.0 to 3.5 kg, weight at 6 months 27.0 to 32.0 kg, weight of adult males 50 to 60 kg, and weight of adult females 35 to 50 kg.
The main breeding season occurs in May and June by natural reproduction, and the herds use a male-to-female ratio of 1 ram to 20 to 25 ewes. The young ewes, primiparous, are placed in mating between 7 and 12 months of age. The ewes present a continuous reproductive cycle, with the following reproductive parameters: fertility rate 85 to 95%, prolificacy rate 100 to 130%, fertility rate 95 to 130% and productivity rate of 85 to 110% (DGAV, 1991).
The lambs intended for meat production are slaughtered at 2-3 months of age, and are kept with their mothers until slaughtering. The lambs destined to the replacement are weaned between the 3th and 4th months of age. The ewes show an excellent maternal instinct and can be kept in production until about 8 years of age, usually teething wear is the main limiting factor to the longevity of the ewes. Males reach reproductive maturity close to 7 months of age, but only initiate reproductive activity near the one year of age. The CGB lamb meat is protected by a Protected Denomination of Origin (PDO) certificate designated by Cordeiro Bragançano (Commission Regulation (EC) No 1107/96). To acquire this label, the lambs must be fed with ewes milk, and after one month of age they can be supplemented with local feeds and fodder. It is forbidden to use products that might interfere with lambs growth and development such as: hormones, antibiotics, sulfamides, steroids, etc. (ACOB, 2018).

The Bordaleira of Entre-Douro-e-Minho (BEDM) sheep breed belongs to the bordaleiros sheep group. There is not much information about the origin of this Portuguese native breed, however they are believed to be descendant from the ancestors Ovis aries Iberian and Ovis aries ligeriensis that populated the Peninsula Galaico-Duriense region. Likewise, the evolution of the population of the BEDM is not known and, currently, the population is composed of 4578 females and 231 males explored in pure line (DGAV, 1991).
They are small animals and exhibit, predominantly, fleece of crossed wool, however they present a high variance respect to this feature (DGAV, 1991). Some animals present long and good-quality veils, while others have coarse veils of the Churro type. This observation is certainly associated with the crosses of this breed with sheep from the Alentejo, Trás-os-Montes and Galicia, as referred to in the 1870 Report (DGAV, 1991).
The main mating season takes place in the months of June and July, as these presents the highest abundance of pasture. The ewes start the reproductive activity around 10 months of age, so the first lambing takes place around 15 months of age. The rate of multiple births is low and, traditionally, lambs weaning occurs between the 4th and 5th months of age. Being rustic animals, they are well adapted to the mountain environment and are explored to meat production (DGAV, 1991). The meat is essentially used for self-consumption by families. However, the local restaurants often seek for small lambs, so some are slaughtered when they reach one month age, however traditionally lambs are slaughtered between 3 and 4 months of age.
Currently, the BEDM population is in sharp decline, partly due to the abandonment of this activity, and partly due to the introduction of improved breeds. The animals of the BEDM breed are raised in small herds, and rarely exceed 15 breeding females.
The productive indicators of EBDM are: birth weight of 2.5 to 3.0 kg, weight at 7 months of 15 to 20 kg, weight of adult males 45 to 50 kg and weight of adult females of 30 to 40 kg (DGAV, 1991). The reproductive indicators of BEDM are: fertility of 80 to 90%, fecundity of 90 to 130%, prolificacy of 100 to 150% and productivity of 80 to 120%. The ewes can be kept in production up to 10 years of age and present reproductive activity throughout the year (DGAV, 1991). Weaning of lambs usually occurs between 4 and 5 months of age.